In the Deep End – Book One

This bold new novel is Book One of the, In the Deep End, Series

Set in New Zealand and California, two families are lifelong friends who travel between both countries as two of the protagonists reveal their life-long secret love affair.

A moving family saga which contradicts moral stereotypes and defies love-bonds that should last a lifetime. With unexpected twists and turns, this contemporary romance uses humor and poignancy to challenge forbidden love. Their ordinary domestic lives are in direct contrast to their extraordinary love affair, often captured in well-crafted private emails. These addictive personalities buck social norms as they navigate their way through an emotional tempest that threatens to rupture them all apart. 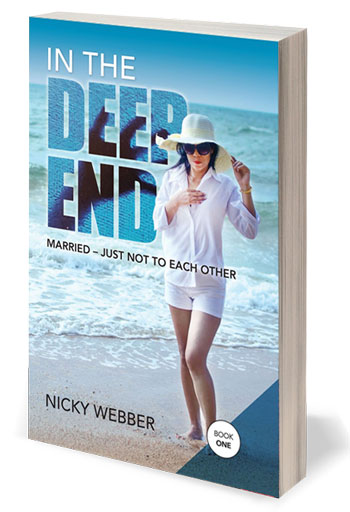 BUY THIS BOOK ON AMAZON

In the Deep End – Contemporary fiction

“This book is a superb piece of work: an incredibly sensitive and perceptive insight into both the female and male emotional psyche. I read, In the Deep End, straight through – between laughter and tears. You are truly exceptional. Can’t wait for masterpiece Number Three.” Sean Lowe

I just finished reading In the Deep End and once I started reading this amazing novel I just couldn’t wait to get to the next page. You desperately want to find out what happens next. The last chapter was amazing and so unexpected. I recommend this novel to any reader that likes excitement and mystery. Peter Perret

This is an exciting and complex read. People are intriguing, and Nicky Webber has captured the heartbreak and the heartfelt moments beautifully. Well done and … where’s the next one please!!! Katrina King

In the Deep End is an interesting and well written story. I was thankful for a wet day – I hunkered down on the sofa with rug and read all afternoon. It was hard to put down. I definitely recommend this great read. Carolyn Boardman

The stark, white-tiled bathroom almost hurt Alex’s eyes as he surveyed the room. He stood clutching the door frame to steady himself. The light bounced off the hard surfaces as he became aware of a faint chemical smell. Tears had welled up into his eyes. He glanced down into the bath again where his wife’s dead body lay. Mila Jones was fully dressed, awkwardly slouched against the cold porcelain. There were no apparent signs of a struggle, no blood nor injury. Her sheer white blouse innocently clung to her breasts and was tucked into the waist of her jeans. Her feet were naked, her shoes neatly positioned on the bathmat.

Somehow the sight of her two beautiful bare feet stabbed him with pain. Something was haunting and isolated about her lying there. She would never walk beside him again. He would never sit on the sofa, gently rubbing her feet, while watching television together as she drifted into a relaxed sleep. He gasped out loud. The sharp loss cut into his very soul. Moments earlier he had tried unsuccessfully to lift her, but in his panic soon realized he needed to call the police. Once his address was established the response was unmistakable.

‘Don’t touch anything!’ the female emergency responder said into his muffled ear. Was it his voice or had sobs and screams already escaped into the room? The painful noise in his head was overwhelming. He couldn’t think. He didn’t know how to explain or what to say. She repeated herself and reassured him the police would soon arrive, he dropped the receiver and strode back to the bathroom. Hoping against cold reality that he had somehow misunderstood. Mila couldn’t be dead. He carefully walked towards her again, her mouth, slack-jawed, a gas mask shoved half over her head. He had pulled it from her face and pushed it back over her long dark hair which straddled the rim of the bath. He felt her neck for a pulse again, his fingers concentrating their efforts to pick up a heartbeat. Nothing. A gas canister and rubber hose lay slumped on the tiled floor. Suddenly the full realization of her death slammed into his consciousness.

Alex Jones flung his head back, releasing a heart-wrenching, guttural scream. The primal sound escaped from his strangled throat like a trapped animal desperate to free its soul. His tortured shriek would have chilled the blood of the most hardened observer.

But no one was there. He was utterly alone.

Alex knelt beside the bathtub and pressed his cheek against his wife’s face. Her skin was still faintly warm, giving him a momentary shock. Pulling back, he looked into her eyes, wide but now glassy from the eroding fingers of death. He understood she had gone, leaving only her body behind. A loud, uncontrollable sob escaped his lips as he began to cry. A remote doorbell rang. He stood, bracing himself on the edge of the bath. He took a few steps and turned his tear-stained face towards the door. He stopped as the doorbell urgently rang a few more times. His stricken face glanced back at his lifeless wife. ‘Why?’ was the only question he asked himself.

Mila had been so full of energy and light. They had shared over 30 years of marriage but never in his wildest dreams could he have imagined their wedding vows would end like this. He was four years older than her, and he took it for granted that she would outlive him. Her suicide was premature, especially considering the oncologist had reassured them both that she could remain in remission for several more years.
Two years earlier when first diagnosed with breast cancer at the Cedars-Sinai Medical Center in Los Angeles, Mila had confided that she had no intention of rotting in a hospital bed. There would be no ‘courageous fight to the end’ as the death notices often publicize.

‘No way!’ Mila announced. ‘I want control over my untimely demise.’

She raised her orange juice and clinked the glass again with Alex’s coffee mug. Her dark eyes laughing at him. ‘Don’t look so morose. It’s only death. I’m not banning you from sex, chocolate, and beer.’

He gave a wry grin. ‘So, what sort of time-frame are you talking about?’ he asked. ‘When’s your cut-off date?’

‘I’ll know when I know.’ She smiled across the table.

‘You’re going to tell me, right? You know how I hate surprises!’

She shrugged. ‘Of course! Let’s not dwell on it.’

‘No!’ She was convincing in her quick response. ‘Of course not.’ She walked around the kitchen table and kissed him on the nose and forehead as if he were a fractious child. ‘There’s plenty of life left yet!’

Alex marveled at her deception. It was only five days ago they chatted so nonchalantly over breakfast. The early morning sunlight was streaming into their white and stainless-steel kitchen. Shades of morgues and hospitals, he now thought. Why hadn’t he seen the signs?

A bunch of purple and yellow Irises lay wilting in their glass vase on the timber dining table. The succulent green stems looked slightly blurry, but on closer inspection, Alex saw they were fuzzy from their process of dying. Like his dead wife, they too had joined the relentless treadmill of life’s terminal touch. He walked over and picked up the limp flowers putting his nose to them. They smelt of nothing, not even of decomposing plant matter. Just blank. The end. He unceremoniously wrenched the flowers from the vase and shoved them into the kitchen sink. Gathering up the slimy stems he flung them dripping into the under-counter rubbish bin.  He flushed the tap water down the drain, a few dead petals and soggy leaves spun around as the water emptied. He filled the container with cold water and left it standing in the sink. There would be no more flowers. Flowers, funerals and the other f-word were now engrained is his psyche, and he could never look at flowers again without thinking of Mila and her laughter. She would be wordless, silenced now for the rest of his life.

This site uses Akismet to reduce spam. Learn how your comment data is processed.